International Training Programme for Potato Farmers on Oct. 27-28, 2014 in Kannauj 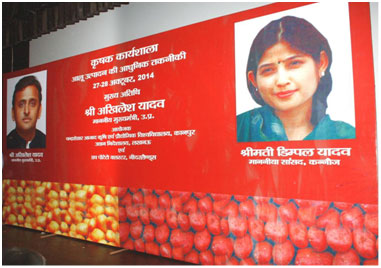 Welcoming the Chief Guest, Special Guests, dignitaries and potato farmers, Vice-Chancellor Professor Munna Singh uplouded the vision and initiative of Hon’ble Chief Minister Shri Akhilesh Yadav Ji that concluded in signing the intent of agreement between Govt. of Uttar Pradesh and NAFTC- India for cooperation in transforming agri-sector in the state. He expressed gratitude to Hon’ble Chief Minister for his generous support to strengthen and establish five new Colleges in the Kanpur Agriculture University viz. Horticulture and Forestry at Kanpur, Dairy Technology and Fisheries Sciences at Etawah and a new Agriculture College Campus at Lakhimpur Kheri. It was brought to the kind notice of Hon’ble Chief Minister that an establishment of College of Food Science & Technology would be and essentiality for producing quality HRD/ students. It was also requested that establishment of potato processing industry will extend sustainability for agro-socio economy for the farmers and state as well. Due to keen interest of Hon’ble Chief Minister Memorandum of Understanding with Dutch Potato Cluster-NAFTC-India and C.S. Azad University of Agriculture & Technology, Kanpur being signed on Sept. 20, 2014. Consequently, potato growing farmers will get the training on Potato Production step-wise on selection of the quality seeds along with preparation of land/ farms, crop management, harvesting, grading, packing and storage techniques followed by potato processing and marketing. Thus, the farmers will get quality knowledge on potato chain programme in Kannauj. Prof. Singh also welcome Shri V.N. Garg, Special Guest-Agriculture Production Commissioner-U.P., Prof. Anton Haverkort, Waginengen Agricultural University-Netherlands, the dignitaries and farmers.

Delivering the key-note on this occasion, Shri V.N. Garg, Agriculture Production Commissioner- U.P. said that the state government has been toiling hard for the potato farmers of the region. He narrated the sequence of events and actions of Govt. that resulted in arranging this International training for potato farmers of the region with Dutch-Collaboration, and expressed gratitude to the Hon’ble Chief Minister for his keen interest and guidance in signing the intent of agreement with Netherlands for development of agri-sectos in U.P. Shri Garg called upon the scientific community and development officials of the state to set specific goals to ensure that the benefit of laboratory research and Govt. schemes reaches the farmers to help raise their income.

Reading-out the message of Netherlands Ambassador to India, Mr. Marilin Leijten, Director, NAFTC-India thanked Hon’ble Chief Minister Shri Akhilesh Yadav for his visit to Netherlands and soliciting Dutch co-operation for modernization and up-gradation of potato and Dairy industry in Uttar Pradesh. He assured, on behalf of the Dutch Govt., that NAFTC-India and Wageningen Agriculture University-Netherlands will share technical know-how and co-operate in transforming agri-sector in Uttar Pradesh.

Prof. Anton Heverkort, the renowned potato expert from Waginengen Agriculture University-Netherlands, shared his views and long experiences in potato research while stating that potato yield in Netherlands is very high (46 tonnes per hectare) due to nature’s gift of long sunny-days (13-14 hrs) & cold nights during summer and longer crop-duration. He appreciated that the farmers of Uttar Pradesh are able to harvest 25-30 tonnes potato/ hectare despite the fact that potato in U.P. is grown during winters under multiple cropping system when the days are short and crop-duration is also shorter, compared with the Dutch potato season. He, however, suggested that yields and quality of potato in U.P. could be improved substantially by using disease-free planting material and by adopting scientific technologies for sowing potato with crop-care, nutrient-irrigation-weed management with pre-& post-harvest handling.

Hon’ble Minister for Horticulture and Food Processing Shri Paras Nath Yadav expressed serious concern about quality production of potato by using modern techniques as adopted by the developed nations such as Netherlands to acquire optimum productivity. He has appreciated the farmers who have attended the training programme with the remarks that they must try to assess the gaps in potato cultivation in comparison to Netherlands. He also expressed that U.P. may achieve quality production and processing for potato due to keen intervention of Hon’ble Chief Minister in times to come.

Inaugurating the training programme, the Chief Guest, Hon’ble Shri Akhilesh Yadav Ji said that Uttar Pradesh excels in potato production, and is a leader in milk production also, but the farmers do not get remunerative price for their produce due to inadequate storage and transport facilities, marketing network and processing facilities for these perishable commodities. He said that his Govt. is committed to improve the socio-economic condition of Potato and Dairy farmers through implementation of Potato and Dairy Policies at the state level. The potato growing farmers in U.P. must be given practical training for quality production of potato which can be utilized for value added products. This requires their International exposure. Therefore, two-days training programme is scheduled in Kannauj for the potato farmers so that they can be acquainted/ trained with the superior technology available with the Netherlands expertise. Therefore, Prof. Anton Haverkort, Waginengen University-Netherlands (the second best Agriculture University in the world) is available for the farmers in Kannauj who will be delivering the lectures on potato cultivation with field demonstration so that over 500 farmers who have come from 11 Districts (Kanpur, Kanpur Dehat, Farookabad, Firozabad, Etawah, Manipuri, Orraya, Aligarh, Hathras, Kannauj & Agra) may acquire complete knowledge for quality potato production. The ultimate aim of the International training programme is to ensure improved agro-socio-economy of the potato growing farmers of the state.

The inaugural function was concluded with the Vote of Thanks, presented by Professor Rajendra Kumar, Director General-UPCAR.


Technical Session – I : In - Room Training

In his opening remarks Chairman Shri V.N. Garg gave a brief account of potato production, storage and trade situation in Uttar Pradesh and also appraised about the policy and programmes of state government to boost production, transport, storage and processing of potato in the state.

Co-chairman of the session Vice Chancellor Professor Munna Singh appraised about the climatic barriers (shorter days and crop-duration) and the problems faced by the patato farmers which result in sub-optimum (lower than the realizable) yields of potato in Uttar Pradesh. He also gave a brief account of the step-wise trainings to be orgainzed in near future in the potato-belt, with the co-operation of NAFTC-India for boosting potato cultivation, pre- & post-harvest care, grading, packing, storage, transport and value-addition of potato. Prof. Munna Singh presented a brief introduction and credentials of the world-renowned potato scientist Professor Anton Haverkort of Netherlands.

Professor Anton Haverkort, the lead speaker of the technical session, made two power-point presentations on the topics - ‘Prospects of Potato Production in India’ and ‘Basic Concepts of Potato Production’. Mr Ravindra Bahukhandi of NAFTC-India made simultaneons translation of the talk, delivered in english, into Hindi while Professor Munna Singh explained various points, made by Professor Harvekort, in simple lucid local language for the benefit of participant farmers.

In his first lecture on ‘Prospects of Potato Production in India’, Professor Haverkort said that potato is the single most popular vegetable-tuber crop grown in more than 100 countries of the world. Most significant points made in the talk are as under :

The training for preparing the field/ land, nutrient application and all other related strategies were demonstrated on-farm in a village Niwajipur in Kannauj. The owner of the farm Mr. Vipin Katiyar, who is a progressive farmer for potato production, has extended all the facilities for the on-field training programme which started around 9:00am in the morning and could get completed by 12:00.

Prof. Anton told that in India nearly 9.2 plants/sq m maintained from line to line while only four plant/ sq m maintained in Europe. He has pointed-out the reason for the difference as crop gets more time duration in Europe compare to India. He agreed with the potato growing concept adopted in Kannauj by the potato growing farmers which was about 65cm from row to row and 17 cm from plant to plant. It has extended nearly 1080 cm sq area for the four potato plants canopies to acquire sufficient light for carbon fixation through photosynthesis. He has also told to the farmers for the following important instructions prior potato sowing :


Prof. Anton demonstrated all relevant techniques for potato sowing as shown in the figures :

Figure 1 : Prof. Anton, Prof. Munna Singh & other officers discussing with the farmers on potato growing field. Prof. Anton clarified about the quality of field and seed preparation for potato sowing.

Figure 2 : Prof. Anton demontrating potato sowing techniques on the field to the farmers.

Figure 4 : Prof. Anton explaining about the retention of the moisture levels in the field essential for the on-time germination through precise irrigation within 2-3 days after the potato sowing on the ridges.